Titans Wiki
Register
Don't have an account?
Sign In
Advertisement
in: Characters, Allusions to the comics, Heroes,
and 3 more
English

Edit
watch 01:55
Cobra Kai Season 4 - The Loop
Do you like this video?
Play Sound

"No retreat, no surrender!"
—Garth[src]

Garth (c. 1992 – 2014) was a former member of the Titans, known as Aqualad. He was killed by Deathstroke, which discouraged and disbanded the original roster of the team.[1]

Working with the Titans[]

Garth joined the Titans as Aqualad in 2014. He was on the team for four months, during which he aided in capturing criminals and played a big role in defeating Dr. Light. During his time with the Titans, he developed romantic feelings for Donna Troy.[1] During one New Years Eve at the Hall of Justice, Donna was convinced she could find Nemo despite the cold. Garth followed her to the nearest body of water and used his telepathy to call a clownfish to make her happy.

"And clearly, Garth's been blessed with other... noble attributes."
—Jillian to Donna Troy[src] 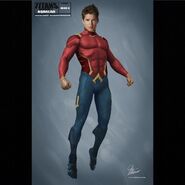