Start a Wiki
watch 01:29
'Titans' Profile: Donna Troy
Do you like this video?

For the episode of the same name, see Donna Troy.

"Things get dark and you need someone to talk to, I'm always here. After all... us sidekicks gotta stick together."
—Donna Troy to Dick Grayson[src]

Donna Troy (1989-2019)[2] was a photographer and the childhood best friend of Dick Grayson and the former girlfriend/childhood friend of the late Garth as well as Diana Prince/Wonder Woman's foster daughter and her former sidekick Wonder Girl.

At a very young age, Donna's father was killed in a fire set in the landing of their apartment building by an arsonist neighbor, an experience that left her deeply traumatized.[2]

She was eventually found and taken in by Diana Prince, also known as Wonder Woman, and taken to Themyscira, capital of the Amazons, where she was trained to become her sidekick. Sometimes, Diana would attend Justice League business at the Wayne Manor and would bring Donna to accompany her. At some point, she met Dick Grayson and the two formed a sibling-like bond. She would often offer him advice whenever things seemed too complicated or stressful for him.[3] During the many JL-related encounters, Donna also met Garth, a young Atlantean boy and Aquaman's foster son and sidekick with whom she form a close friendship; they sneaked out of the Justice Hall together on 2003 New Year's Eve drinking ginger ale since their mentors said they were too young to alcohol. As the girl was diving in the cold water determined to "find Nemo" (the Pixar animation character), Garth, having a crush on her, secretly used his powers to make a clownfish come to her.[4]

Over the years, Donna eventually stopped training under Diana and followed her path as a superhero then, wanting to explore her independence outside her foster mother and mentor, she asked to spent some time alone in the men's world.[4]

In 2014, she joined the Titans together with Dick, Hank Hall / Hawk, Dawn Granger / Dove (with whom she became a great friend) and later Garth himself, now known as Aqualad. During his time with the Titans, Garth's romantic feelings for her intensified and Donna started to reciprocate him. However, getting scared of what she felt, after helping the team in defeating Dr. Light and spending one night of passion with the Atlantean she contacted fellow-Amazon Jillian asking to be taken back to Themyscira. Garth confronted her at the airport and they both admitted their love to each other, shortly after though, Deathstroke ambushed them, firing a bullet at the both of them and Garth took the hit dead-on in the chest, protecting Donna at the cost of his own life. A heartbroken Donna and the remaining Titans vow to bring down Deathstroke no matter what,[4] leading to a massive battle that ultimately put the Titans to an end.

Sometimes after this, Donna became a photographer to do things her way, such as expose poachers.[3]

Years later, in 2018, she ran into Dick again, who claimed that he quit being Robin. Seeing that he sought advice and a place to stay, she gladly lent a helping hand. To help clear his mind, she brought him to an exhibition featuring her photographs. However, she received a text message regarding personal matters and told Dick she had to take care of something before leaving. Rendezvousing with a strange group of men, she was taken to a warehouse and was introduced to a poacher named Graham Norris, who offered her the chance to expose his supervisor. While concluding her meet-up, Dick appeared and attacked the remaining poachers, including Graham. Following the assault, she faked photographs to avoid any suspicion being involved.

Back at her own home, she spoke to Dick on his internal issues and hoped to give him some insight on who he truly is. While looking through his phone she found an image of a transcript found in Kory Anders' storage unit, written in a peculiar text. Upon Dick's request, she attempted to translate it. The following day, while on the road, Donna finally got somewhere with translating the text and revealed that Kory was sent on a mission to kill Rachel Roth also known as "The Raven".[3]

Reaching Angela's home just in time, Donna entered and stopped Kory from further harming anyone. Using her lasso, she subdued Kory and was recognized by Gar Logan. Kory eventually regained consciousness but drove off in a frenzy. Before Donna and Dick were prompted to follow, Donna threw a tracker onto her truck. She and Dick were eventually led to an old warehouse where Kory claimed her memories were leading her. Once they got inside, a large spacecraft revealed itself to be Kory's ship. Both Donna and Dick were informed that Kory is from another planet and that her mission is to kill an interdimensional being named Trigon: A demon capable of destroying her world and many others. Reading an old manuscript that explained the prophecy, Donna concluded that Rachel's mother, Angela, might be involved in Trigon's plan.

On their way back to the house, Donna flipped through the book and discovered that there is only one way to defeat Trigon—through Rachel. Suddenly, all of the power went out, including their vehicle. They all proceeded on foot and found Angela's house invisibly cloaked in a sparkling dome. After Dick easily ran through, Donna and Kory attempted to follow. However, the field repelled them, keeping them both outside.[5]

Kory continuously tried to get through the barrier by ineffectively unleashing her power, prompting Donna to warn her that she was wasting her strength. They were interrupted by Jason Todd, Hank Hall, and Dawn Granger, who had come to assist. As time went on, the barrier was mysteriously opened, and they entered one by one. Once inside, Donna entered an illusion, reliving the day of her father's death. Discovering the perpetrator of the fire that killed her father, she killed the arsonist, giving in to her darkness, coming under Trigon's control. Ultimately, everyone gave into Trigon's darkness, cornering Rachel and Gar, and beating up the latter. Trigon finally claimed Rachel's heart, regaining his true form and exiting outside to enact his plan. Mindlessly, Donna and the rest waited as Trigon began to corrupt earth. Once Rachel eventually regained control and defeated Trigon, the impact from the battle knocked them all off of their feet, snapping out of their states. While they bid farewell, Donna left with Kory, Hank, and Dawn.[6]

Donna and Kory headed to Chicago, where they searched for an old adversary of Donna's, Shimmer after Donna received some intel from Roy Harper. Despite the tireless search, they couldn't find her. They eventually gave up for the night, only to find her coming down the street as they exited their van. The two worked together to bring her down, Donna trapping and pulling her with her lasso, calling the FBI. Donna stepped away to take a call from Roy, while Kory went to get them tacos. When Donna returned, however, Kory was nowhere to be found.[1]

Back to the Titans TowerEdit

Donna made her way to Titans Tower in San Francisco, meeting with Hank and Dawn. They discussed plans to take down Dr. Light with Dick, before he let them know that they had a guest, Rose Wilson, also the daughter of their former rival, Slade Wilson. They all expressed anger at him harboring a probable enemy, but he asked that they focus on the problem at hand, Dr. Light. Donna received a call from Kory, who explained she'd been caught up with an unexpected friend. She asked Donna to keep an eye on Rachel for her. Waiting around for leads, Donna was met by Dick in the kitchen. She asked him why he'd possibly start the Titans back up, given why they'd shuttered it in the first place, expressing her fear that Slade Wilson would get the best of him. Finally locating Dr. Light, the four original Titans made their way to a stadium, where they surrounded him. He shot blasts of light energy at them, fleeing from the stadium. Donna managed to speed up to him, subdue him by throwing a motorbike with her lasso, but he ultimately got away when a busload of civilians interrupted the fight. They promptly made their way back to Titans Tower.[7]

After saving Dawn, Donna is electrocuted and killed when she prevents a damaged transmission tower from landing on civilians. Her body is taken back to Themyscira.[8]

"What you saw was who she was. She cared for people. Cared for doing right."
—Dick Grayson to Gar Logan[src]

Donna was probably the most functional among all her friends, leaving her superhero life behind, but not because of traumas, but because she wanted to do good in other ways, keeping her Wonder Girl suit in her closet, despite being out of the life. She also had a brother-sister bond with Dick, knowing him better than anyone else and giving him advice, understanding how growing up as Robin was difficult and, at the same time, pushing his buttons, because she is "older, smarter and prettier" and calling him "Boy Wonder".

She could, however, also take matters with a serious attitude, like Dick's urge to punish the guilty by not judging him, but stimulating him to find his path and become his own man, showing maturity and level-headedness. She was also an avid photographer, having started in her youth and the hobby evolving into her profession.

Despite not being her sidekick anymore, she loved and respected Diana not only for raising her but for the symbol that she represents: the symbol of protection for the innocents, taking her teachings to heart well into her adulthood. Also, while not being a violent person, she had no problems with fighting if necessary, like when Kory went berserk, subduing her. 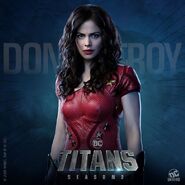 Retrieved from "https://titans.fandom.com/wiki/Donna_Troy_(character)?oldid=19838"
Community content is available under CC-BY-SA unless otherwise noted.